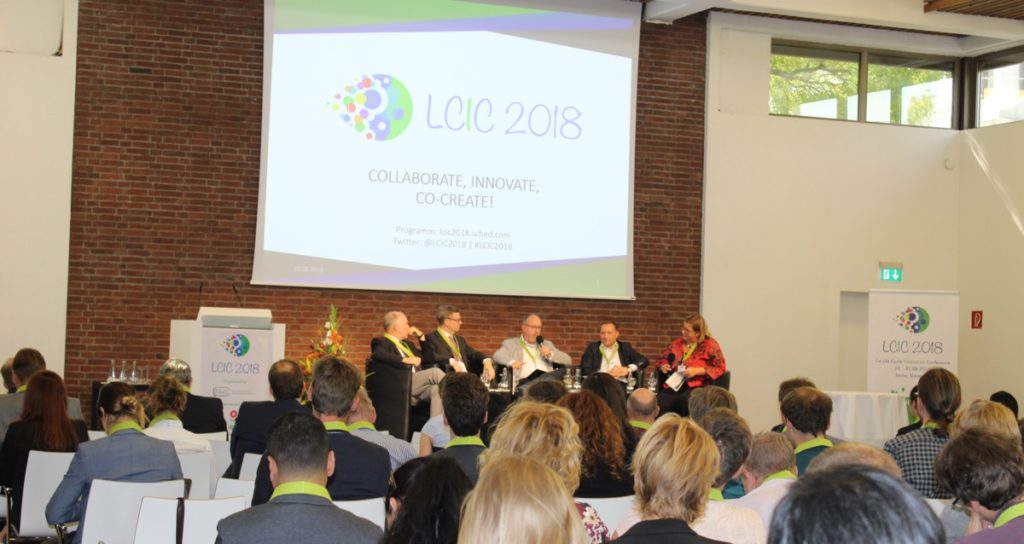 From 29. – 31. August 2018, the FSLCI organized its first ever Life Cycle Innovation Conference (LCIC 2018). The conference, held under the theme „Collaborate, Innovate, Co-Create“ brought together more than 150 participants from all around the world with various backgrounds to engage on the nexus between sustainability and innovation.

The conference, organized by the FSLCI and sponsored by iPoint Systems and BASF, featured an innovative concept focussed around interactivity and engagement. In addition to traditional abstract based sessions, participants could select to attend workshops or become active themselves and moderate a barcamp session. During the start of the conference a number of participants made use of this option and proposed topics for group discussions, which were voted upon by the audience which thus created an entire track of the three day program themselves.

The second day started with a keynote by Jörg Walden, CEO of iPoint-Systems, on “Digitalization as Key to Enabling the Circular Economy and Life Cycle Innovation“. The keynote was followed by a intro into blockchain technologies from Victor Peter (GIZ) and a panel discussion on the nexus of digitalization, blockchain and sustainability with Claire Henly, Johanna Pohl and Toni Caradonna.

The last day of the conference focussed on the subject of marine litter, which was presented by Peter Kershaw, a reknowed expert in the field. Marine litter has become a major topic for the FSLCI throughout the last year thanks to the Medellin Declaration and our workshop on Marine Litter and LCA which we organized in May. During the panel discussion on the subject with Patrica Vangheluwe, Peter Saling and Sonia Valdivia, our workshop report was launched which can be accessed here.

Throughout all three days participants discussed a broad range of topics around life cycle innovation and touched for example on issues around digitalization, design thinking, social sustainability, the SDGs, circular economy and new LCA developments. Highlight of the conference was the gala dinner on the second day, which was hosted at the Refugio, a co-living space between refugees and locals in Berlin. Dinner was provided by a couple who fled from Syria, who will soon launch their own restaurant Levante Gourmet in Berlin and who served a wonderful tasty variation of Syrian dishes to conference participants.

After three intensive days, LCIC 2018 concluded on Friday afternoon. Based on the success of the first iteration of the conference, we are happy to announce that the conference will take place every two years in Berlin. In addition, we are looking for regional partners that might have an interest in bringing the LCIC concept to other regions around the world.

We would like to thank everyone who participated in the first Life Cycle Innovation Conference in Berlin and thereby made it such an interesting and unique experience. We are absolutely thrilled by the positive feedback received so far and cannot wait to welcome you to future iterations of the conference or other formats that we have in store for you – stay tuned!