Nearly a month after LCM 2015, it’s high time for a little review of our experience at the conference. As some of you know, we already arrived in Bordeaux a few days earlier to ensure that the Summer School that we had helped to organize right before the conference would work out fine.

Starting on Friday morning, students and lecturers arrived and filled the empty halls of Bordeaux’s Conference Center already with some noise. Over the following two days we were quite pleased with the level of engagement by the students who were eager to not only learn about new concepts such as the criticality of metals, but also had various questions of their own which they brought to the table. After two interesting days, students participated in the short courses that were also offered to participants of the LCM Conference on Sunday. 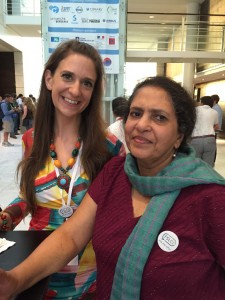 Already during Sunday’s LCM Welcome Reception, conference participants started to notice the presence of the FSLCI due to the little buttons which we had provided our members with. The slogan “FSLCI, ask me why!” worked brilliantly not only during the reception, but throughout the entire conference and thus we became one of the key topics that were discussed over the next few days.

In addition to providing our members with these little buttons to facilitate the conversation on us, our interactive plenary session on Monday morning further provided food for thought. Moderated by our own Jim Fava, Anne-Marie Boulay (WULCA), Martina Prox (FSLCI), Peter Saling (BASF), Sanjeevan Bajaj (FICCI) and William Flanagan (GE) discussed about the necessity for the life cycle community to enhance collaboration and communication – both among us as life cycle experts, but even more importantly with other communities and stakeholders. The panel essentially made the case as to why the FSLCI is needed and was very well received by the audience, who contributed with great additional insights and questions.

Last but not least, our booth served its purpose really well. It was not only used as a major get-together hub by our members, but also helped us to inform interested conference participants about our ideas and objectives. We also managed to register quite a number of new members throughout the conference at the booth and received an incredible amount of positive feedback on our initiative. We also received quite a lot of questions about us and have used them to develop a short FAQ section here on our website which we hope will answer many of the questions that we’ve been asked over the past few weeks. 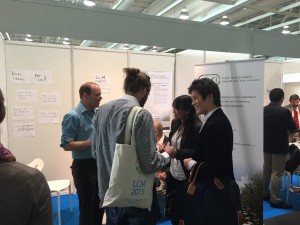 Finally we did not only organize our General Assembly and elected an entirely new Board of Directors into office, but were also thrilled to welcome a large number of interested stakeholders to our Inaugural Forum for Sustainability through Life Cycle Innovation, right after the conference on Thursday morning.

All in all, LCM 2015 was an amazing experience for us and we would wholeheartedly like to thank not only the organizing team that supported us tremendously well with all our requests, but everyone who participated in one way or the other by attending our events, visiting us at our booth or asking questions in the plenary! We’ve been working for more than a year towards LCM 2015 and we could not be happier about how it all came together! Thank you so much for making LCM 2015 such an amazing experience for us. We’ll be at many other conferences around the world and very much look forward to continue the dialogue offline or online that we started with you in Bordeaux!